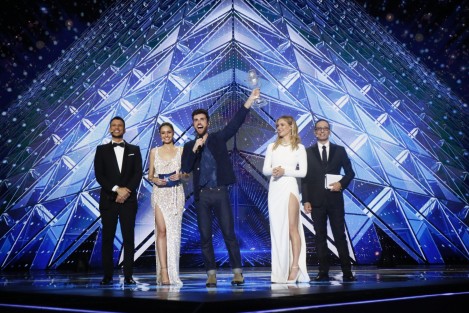 Wow – that was a long night! What was planned to be a 3h30min broadcast ended up 4h10min before the winner was finally announced – and dear goddess wasn’t that an excruciating last half hour? The new procedures for presenting the results from the televote was totally nerve-wracking, and it wasn’t until the very last point was delivered that we were able to finally breathe normally again. I’m guessing I wasn’t the only one with palpitation there in the end?

Before we get into the nitty-gritty of the results, let’s just take a look at last night’s show in general. The opening act, with Netta arriving with all contestants in a – not quite politically correct, climate crisis-wise – aeroplane, was massive. As was the brilliant Mix-and-Switch act where former ESC participants performed each other’s songs. The Mentalist from Semi Final 1 was back with another act, honouring the 45th anniversary of ABBA’s win in 1974, and, following tradition, last year’s winner Netta was back to perform her latest single Nana Banana. But apart from that, the rest of the in-between content should have been cut out – if for no other reason but to keep to the announced broadcasting times.

Worst of all, unfortunately, was the much-hyped performance by Madonna – an act the organizers have been talking about for months but none of the Eurovision fans ever asked for. What could have been an epic act, with her performing the old hit Like a Virgin and then the brand new single Future, turned out an epic fail since this was about the least in-tune singing performance we’ve heard during this year’s Eurovision Song Contest. Let’s not sugarcoat it, her singing was abysmal and I’ll never understand why she would subject herself and her rand career to such embarrassment. Furthermore, she decided to use the strictly non-political Eurovision stage for sending a ”message of peace” by letting two of her dancers sport the Israeli and Palestinian flags on their backs while hugging, followed by dancers in gas masks collapsing on stage and the message Wake Up branded on the gigantic LED screen. Ouch!

But what about what we’re all here for, the competition?

As could be witnessed during the presenting of the jury votes, there were many entries worthy of winning; the 12-points flew all over the place, rewarded to no less than 13 different entries (half of the competing songs!). Looking at the detailed stats today, it’s noticeable the televotes’ spread was even wider, encompassing 15 entries getting at least one of the highly sought after 12-points. Another fact that was made abundantly clear yesterday was the disagreement between the juries and the viewers. You might think, when all points are summarized by the end it shouldn’t matter which points came from which votes – and maybe that’s right. It’s still fascinating, at least to me, to dive into the statistics once they’re official.

These differences have probably been there ever since the televoting started in 1997, but it wasn’t until the new way of presenting the votes – with the jury votes given out first, and the televotes afterwards – this has been brought to the light for scrutiny. Whatever the reason, it’s a stated fact nowadays that you’ll need support from both the juries and the viewers to succeed in this contest. And just as in Stockholm in 2016, we’re once more presented with the strange situation of Winner by Compromise, as Sweden won the jury votes, Norway won the televotes and The Netherlands eventually winning the context overall when jury votes and televotes were combined. This situation makes for an odd feeling of anti-climax and always raises the discussion of whether the juries should be disbanded from the contest altogether. I don’t know, I’m pretty glad the juries are there to balance out the sometimes crazy and inexplicable decisions of the viewers.

Whatever the case, I’m pleased to see all four Nordic county finalists in the upper part of the scoreboard. And, as a Swede, it’s always satisfying to see how much involvement the Swedish music industry has in this contest. This year, 10 out of the 11 entries with Swedish connections made it to the Grand Final, and 5 of them reaching the top 10 in the end – The Netherlands, Switzerland, Sweden, Azerbaijan and North Macedonia. Well done everyone!

Just two more things before we wrap it up for the year. First, if you noticed the strange voting from the Belarusian jury, you’re totally right. These figures weren’t the jury’s actual results but fabricated results based on the Belarusian jury’s voting in previous years’ competitions thanks to the jury’s disqualification due to illicit leaking of their scores. Second, the qualifications from both Semi Finals were cruelly tight. In Tuesday’s Semi Final only 2 points differed between the qualifying 10th placed Belarus and non-qualifying 11th placed Poland. And the second Semi Final turned out to be even crueller when only 1 measly point differed between 10th placed Denmark and 11th placed Lithuania. Talk about drama…

Next year The Netherlands will host the competition for the first time in 44 years. Will you be with me then?