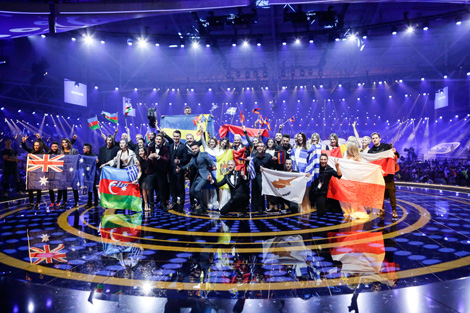 So, this is what happened in yesterday’s Semi Final in Kyiv. The contest, whose slogan of the year is Celebrate Diversity, is hosted by three young white males. A lot of people find that quite odd. Eurovision hosts generally don’t get too much love from the fans or the viewers (if your name isn’t Petra Mede, then you become an icon). Especially disturbing in my opinion was the guy in the green room, Timur, who was scripted to just blurt out tons of Eurovision trivia at the nervous contestants instead of talking to them.

Thank goddess we SVT viewers have the brilliant Edward ad Sillén in the commentators’ booth. Being the acclaimed script writer and lyricist of previous Swedish Eurovision hosts Petra Mede and Måns Zelmerlöw it’s not surprising every comment he delivers is pure gold. And with Måns Zelmerllöw himself as his sidekick SVT has really outdone themselves once again.

Ukraine broadcaster NTU had chosen the local artist Monatik to open the show. He was alright but nothing special, even though I got the feeling he was supposed to be this year’s answer to Stockholm’s Justin Timberlake – which he wasn’t, for obvious reasons (Hello? Justin!).  Last year’s winner Jamala did both interval acts, first a symphonic version of last year’s winning song 1944 – which was exquisite – and then her new song, Zamanyly – which wasn’t.

Nine of the ten acts who qualified for Saturday’s Grand Final were on the bookmakers’ list of predicted qualifiers, with only Finland missing the opportunity in favour of Belgian Blanche, who’s act have improved immensely since her first rehearsal a little over a week ago. Personally, I was thrilled Blanche made the cut since I love her unique voice so much, but I’d happily exclude either Greece or Poland from the Grand Final in a heartbeat if it meant letting Finland’s Norma John qualify in their place.

So, staying on for the rest of the week are: five ballads, five up-tempo songs, one turntable, five treadmills, one upside-down waterfall, three brides, two dancing swans in a water basin, one horseman on a ladder and an epic sax guy.

These are the acts who proceeded to the Grand Final this Saturday, listed in the order they were announced during last night’s show.

Greece: Demy, This is Love

Armenia: Artsvik, Fly With Me